The June Bug has its own month too.

With June drawing to a close, it's timely to give a shout out to the June Bug.  It's actually called a June Beetle, but they are know as bugs most everywhere.  The June Bug is found in Newfoundland but it isn't common. It you see it or come into contact you will remember it.  June Bugs are about as large as we see and they are quite stout.  They are about an inch long and are brown in colour.  The body segments are compact so it appears as one solid nugget with three pairs of legs.

June Bugs emerge in late June to early July in Newfoundland. I've seen them mostly on the western part of the province and have not seen any on the east coast. If something bounces heavy near your porch light it could very well be the June Bug. Its interest is in biting leaves, not people.  :)

I'm heading out on a two-week journey and will post again when I return.  Thanks for visiting.
T. 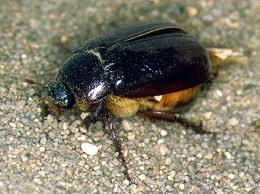 Posted by Troy Mitchell at 7:40 PM