A walk in Newfoundland's woods or along the coastline in June provides an amazing display of new growth.  A colour which begins in May/June and lasts throughout the season is purple - or its varieties. Right now and for the next couple of weeks the Rhodora is in bloom. In fact, if you are out and about in Newfoundland right now the rose-purple you see is most likely Rhodora (Rhododendron canadense).

Rhodora is a native shrub to Newfoundland and can be found throughout the east coast of Canada and the northern U.S.  Look for them on bogs or in other wet places.  They are pretty but toxic.  Rhodora can be found in bunches spannning several meters and much further. They stand at about knee-height and are often among other woody-stemmed plants such as Sheep Laurel and Labrador Tea.

Pause and take a closer look at Rhodora on your next excursion. The flowers will only last until about the end of June.
T. 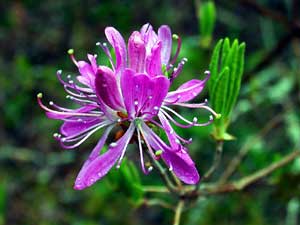 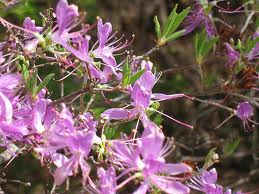 Posted by Troy Mitchell at 2:12 PM