In a recent post I touched on fear of bugs and how most kids are intrigued by things that crawl.  The question is - which bugs are so harmless that kids (or yourself) might be very comfortable touching them?  One option is the Stink Bug. I know, not exactly the best name for a 'touching' recommendation.

Stink Bugs are common in Newfoundland throughout the summer.  If you are clothesline person no doubt one has made its way into the house. They are about the size of your fingernail.  Stink Bugs have sucking mouth parts so pose no threat to you.  The best thing about these six-legged beauties is that they will mostly hang around. Place them on a child's hand and they will walk all around.  Though they are able to fly most times they simply stay put.

Oh - the stink.  Fortunately, Stink Bugs only use their defense system when threatened.  If you happen to hold it too tight or squeeze it accidentially - stink!  Even then it's distinct but not all that bad.

Next summer introduce your child to a Stink Bug.  It will be a huge leap in reducing fear of bugs!!
T. 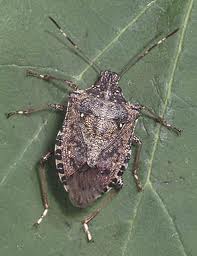 Posted by Troy Mitchell at 7:07 PM