It's an amazing thing - something in the back of ancient brain tells us to avoid bugs; to jump, scream and squish any that come near. Of course there is a good arguement for learned behaviour.  A kid who is left alone will most likely pick up a carpenter (sow bug) and examine it.  An opposite response would likely stem from observing others.

So, are you scared of bugs - is it a phobia?  You may recall a movie called Arachnophobia?   It highlighted one of the primary bug phobias - the fear of spiders (the phobia includes insects like scorpions).  Most people do not like spiders and other insects.  Choosing not to brush up against a spider's web or allowing some insect to scurry by at a safe distance is a normal, socially-driven discomfort with bugs. 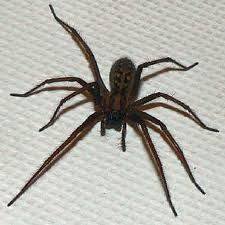 When is it a phobia?   A phobia is a irrational, intense and persistent fear.  There is an excessive and unreasonable desire to avoid the object/situation.  It's important to note that it is irrational - people say/think 'I should know better'.  For example, a person with a wasp phobia might react by letting go of a steering wheel and loosing all control of  car simply to get the thing off...all reason goes out the window.  A key question is 'is it interfering with my life?'.  If so, and you wish to change this, a psychologist could be quite helpful.  They do systematic desensitization - the thing of fear is gradually introduced over time and eventually you are able to move past it.

This is a heavy topic.  Most bugs weigh less than your fingernail and most will not cause harm.  By the way, none of the hundreds of Newfoundland-based spiders which have walked across my hands have ever bitten me.
T.
Posted by Troy Mitchell at 6:45 PM