The Dragonfly.  It is one of the largest insects you'll see around Newfoundland.  Most people avoid them for fear of their biting or stinging abilities. Still, their helicopter-like flight makes us pause in amazement when they hover over ponds or in our gardens. We've dubbed them with names such as 'arse stinger, horse stinger and in some places, devil's darning needle.  My boyhood logic told me to avoid anything which could sting a horse!

In reality, they are not harmful at all.  Dragonflies do not sting.  Also, despite having large jaws they are unlikely to bite - only when handled.  Even then the most a Dragonfly could muster is a good pinch.  Dragonflies are very beneficial to humans in that they feed on other insects - such as mosquitos and black flies, which they catch in flight.

Adults tend to live near water but are very strong fliers and range several miles each day.  Eggs are laid in water or on aquatic vegetation.  In late June and early July look in still water or streams for nymphs (pre-adult). They are often visible walking along the bottom. 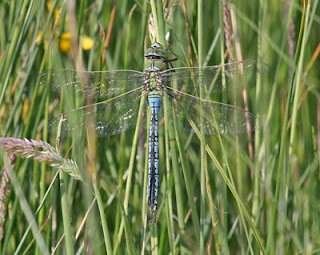 Welcome Dragonflies to your garden. They are nature's awesome insect flier!
Posted by Troy Mitchell at 7:02 PM