Depending on where you live in Newfoundland the word could be ballycatter or maybe battycatter.  Though what it describes is a common winter ice structure, the word has practically lost its use among the younger generation. During winter ice forms around the coast of Newfoundland - in places filling coves and inlets completely. Rougher ice moves in from the north, seemingly endless in places such as Notre Dame Bay on the province's northeast coast.

When an inlet becomes a frozen sheet and eventually breaks up the ridge of ice left attached to the rocks is called ballycatter. It's usually solid and is sometimes used for walking around the coast. Though don't try it; falling into the Atlantic in winter will be the end of you.  Even ice thinly formed around the rocks, clearly outlined during low tide, tends to get the name ballycatter.

So, if you visit a small coastal town in winter test out the word, but stay off of the ice!
T. 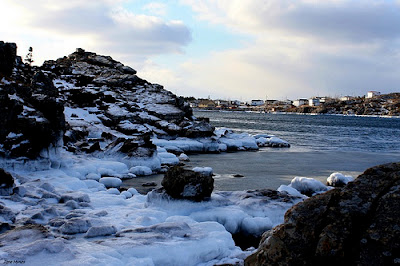 Posted by Troy Mitchell at 7:34 PM