The Iris, more specifically the Blue Flag Iris, is one of my favourite plants.  It is native to eastern Canada and grows throughout the world. The name comes from the Greek word for rainbow; the plant has a variety of colours, depending on where you live. Maybe it's the brilliant purple or the fact that it's not widespread...in Newfoundland it's a plant found occasionally in wet grassy places. The shape of the Iris ensures that a pollinating insect will move pollin perfectly from one flower to the next based on perfectly designed landing surfaces.

The jury is out with respect to it being poisonous to humans.  Some say yes, some say no.  Play it safe and don't ingest, or let your pets do so. When you hike the coastline of Newfoundland in summer have a look-out for the Iris.  You'll be staring at the same plant that Van Gogh did at a difficult time in his life.  His painting, The Iris, now sits at the National Art Gallery in Ottawa - I've been told that it's valued at 75 million.
T. 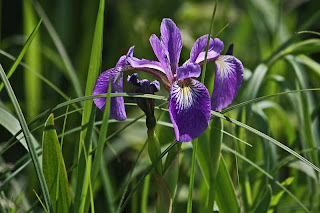 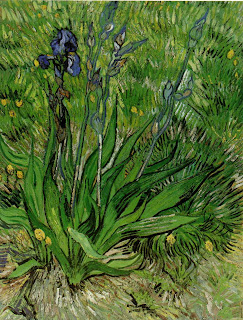 Posted by Troy Mitchell at 7:32 AM