This week's look at nature goes way back.  Trilobites were small ocean arthropods which lived in large numbers on the ocean floor - about 250 to 450 million years ago.  There are thousands of species and they are found throughout the world.

These are great for fossil-hunting with kids.  Trilobites are found in sedimentary rock - the kind which flakes off in layers. Why so common?  When Trilobites gathered in large numbers under/near a slope and that slope collapsed, they were trapped. Their remains were fossilized. Where you find one there will be many.

The most well-known place in Newfoundland  is at Manuel's River on the Avalon Peninsula.  I explored an area on Random Island, at the base of Trinity Bay and near Clarenville.  There, on a hillside, was sedimentary rock and an occasional Trilobite. You have to pick through many pieces of loose rock to find one.  It's amazing that the entire area was once under water.

Here's one of mine below. 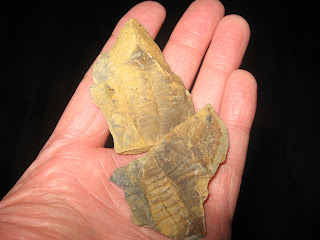 Posted by Troy Mitchell at 7:25 PM