A New Blog and Pounding Seas

Thanks for visiting.  The social media journey is much about writing, reflecting and adapting to what is available. This blog  is a new step from my previous one 'Newfoundland Bugs'.  I will still feature common bugs from our great outdoors, but will expand the blog to include many aspects of nature.

To begin, here's a post from my former blog:  The Pounding Waves at Twillingate.

My recent visit to Twillingate, on Newfoundland's northeast coast, inspires this departure from my usual bug postings.  On December 26 I was in the community for a visit.  The province had experienced a few weeks of strong winds and high tides. Normally at this time of year the snow has arrived making hiking trails inaccessible. Not this year.  The trails are wet but there is no snow.

I left Durrell and hiked towards the expansive and beautiful French Beach.  From there I followed the relatively new trail to French Head. The area marks kilometers of high cliffs, forming right angles with the Atlantic Ocean  The winds were howling but the trail is set safely back from the cliff edge.  The reward?  An amazing display of high, fast waves crashing in the cliffs, a sea of boiling white foam and the air filled with a salty mist.  The soundtrack was the incredible roar of the ocean.  I regret that I had no pics or video - left my camera home.  :(   It was a real treat going to bed that night in Durrell - falling asleep with the dull roar of the pounding seas in the background.

My most recent had been in July when Twillingate and French Head are the opposite of the above. Warm breezes, a jewel of a blue ocean, wild berries every where and the occasionally Humpback whale passing by.  The pic below is taken from French Head and shows Spiller's Rock.

The area is well worth a visit - whether it be July or December! 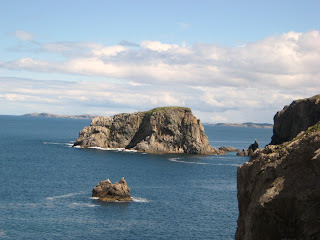 Posted by Troy Mitchell at 8:19 AM